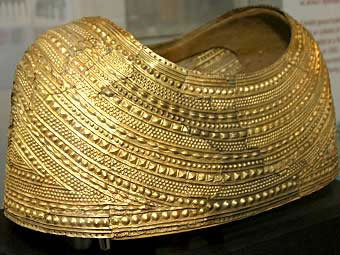 Several prehistoric sacred places have been discovered in and around the Clwydian Range.

THE MOLD CAPE is an exquisitely worked ceremonial cape dating from around 2,000 BC, found on a skeleton buried beneath Bryn-yr-Ellyllon cairn - 'The Hill of the Spectre'. The original cape is in the British museum but a beautiful copy can be seen in the museum above Mold Library.

GOP HILL, near Trelawnyd, is the biggest prehistoric monument in Wales and was probably built around 3,000BC. Further down the hill from this huge artificial mound are caves where burials date back possibly to 6,000 BC.

HOLY WELLS, originally pagan, later Christian, include St Beuno's Well at Tremeirchion, and St Dyfnog's Well at Llanrhaeadr. The most famous of all British holy wells is St. Winefride's at Holywell. Pilgrims have visited the shrine for almost a thousand years. For more information telephone 01352 713054.

LLANRHAEADRE, just off the Denbigh-Ruthin road, ia an attractive small village with a pottery, almshouses, and the 'church of the waterfall' with a path leading to ST DYFNOG's holy well. The church has a double nave (almost unknown outside this region) and a huge 'Jesse window' depicting the ancestry of Christ. Made in the 16th century, this beautiful stained glass window was carefully dismantled at the time of the Civil War and hidden in an oak chest which can be seen today at the foot of the window.

VALLE CRUCIS ABBEY, near Llangollen, is a well preserved monastery in the care of CADW and open from Easter to September.

BODELWYDDAN's Victorian 'Marble Church' is an amazing attraction close to the A55 expressway.

ST ASAPH is home to the smallest ancient cathedral in Britain. Its beautiful interior contains mediaeval canopied choir stalls and magnificent stained glass windows. It is the venue for the renowned North Wales International Music Festival each September and many other events, recitals and concerts throughout the year. The 1588 Welsh Bible is on display in the South Aisle, translated by Bishop William Morgan who is credited with preserving the Welsh language. This bible was used at the investiture of the present Prince of Wales in Caernarfon in 1969. For more information visit website link or telephone 01745 583429.

BASINGWERK ABBEY at the Greenfield Valley Heritage Park is easily accessible and signposted from the A548 and the A55 expressway and a walk through the park leads to St Winefride's Well.

ST MARY'S CHURCH, MOLD, was built by Margaret Beaufort, mother of Henry Tudor, to commemorate his victory over Richard 111 at the Battle of Bosworth Field in 1485. Her third husband was Thomas Stanley, Lord of Mold.

The churchyard of ST GILES CHURCH, WREXHAM, contains the tomb of Elihu Yale, benefactor of Yale University in the USA. His family came from the nearby village of Llanarmon-yn-Ial, from which he took his name.