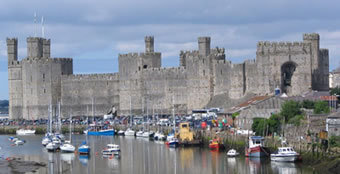 Castles abound in Wales, having been fought over for centuries by Britons and Romans, Anglo-Saxons and Normans, Welsh princes and English kings.

MOTTE AND BAILEY castles were built by the Normans and their remains can be seen in several places including 'Twthill' near Rhuddlan, Bailey Hill at Mold, Holywell and Hawarden.

WELSH-BUILT CASTLES often had a distinctive D-shaped keep as can be seen at Ewloe near Connah's Quay and Dinas Bran near Llangollen.

EDWARDIAN CASTLES are the famous chain of castles built in the 13th century by Edward 1 of England to crush Welsh independence. Flint castle was the first to be built, others which can be visited include Rhuddlan, Beaumaris, Harlech, Conwy and Caernarfon, World Heritage Sites.